Ex. 1 The simple structure of the Menuet as it appears in musical notation will be transformed in the interaction with dance step-units.

The Menuet’s intrinsic flowing quality and electric energy is generated by an interesting counter rhythm between the dance steps and the musical meter. The sequence of the dance step pattern falls across the two-bar phrase. While musicians divide the six beats of two bars into two units of 1-2-3 & 4-5-6, the dancers organize their step-units as 1-2; 3-4; 5-6. Even though these two patterns are compatible, it still creates a tension between the 2x3 division of the musicians and the 3x2 division of the dancers.

The hemiola is today understood as a ubiquitous cadential sequence of the seventeenth and eighteenth centuries in triple meter structures. It was mostly applied at passing or final cadences, aligning the last two bars of a phrase into one unit. Normally, the hemiola is coordinated in the whole ensemble, whereby everybody changes counting from two groups of three (2x3) to three groups of two (3x2), or in HIP jargon, from small three to big three [1].

One could ask why we musicians don’t simply play the hemiola division of 3x2 throughout the Menuet as well, to align with the dancers? The answer is that all the excitement of the playful rhythmical game between the music and the dance would get lost.

Ex. 2 & Aud. 1: The bowing patterns (in smaller circles) are in counter rhythm with the dance step pattern (in larger circles).

In a study of data recorded in a motion capture studio at Oslo University, I further explored the relation (and inconsistency) between the sound-producing bow action and the dance-assimilated body movement. A 'skeletal' model of my body was created by tracking the markers distributed on the essential moving points of my body (hands, wrists, elbows, shoulders, hips, knees, and ankles). Markers were also placed on the bow and the violin. 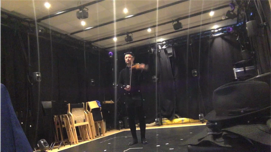 Ex. 3 In a studio at Oslo University I collected motion capture video material for further analysis of counter rhythms between bowing action and dance structure. Are the counter rhythms evident in my body movements?

In the analysis I applied a 'flow display' function in the video playback, whereby each marker leaves a delayed trace of movement. This allows for a qualitative assessment of the timing of the movement trajectory of each body part. I could observe the differing timing trajectories of the body movements (concerned with the dance structure in 3x2) compared with the bow action (concerned with sound and musical structure in 2x3).

Ex. 4: At the bowing junctions, the body movement anticipates the motion of the bow:  a) finishing a downbow, b) starting an upbow, c) the full motion trajectory.

In example 4a, the bow (and the right arm) are finishing the downbow, with a solid trace of the right-hand movement going downwards, while the torso has already turned in the opposite direction (visible on the curve of the motion trajectory trace of the left wrist, head, and the violin).

Example 4b shows the bow now moving upwards, with the traces of the right-hand trajectory curved after the turning point. Again, the torso is ahead: the left wrist, head, and violin are finishing the movement to the left, as if following a different metrical structure to the bow action, possibly accommodating the dance step structure.

Vid. 1: The relation between bow action and body movement.

Note that the actual term hemiola is hardly, if ever, used in the seventeenth and eighteenth centuries. Although this harmonic and rhythmic phenomenon is clearly present in the notation, the term appeared later.

Back to video essay V2c

Back to video essay V2c