When Alexandra Pierce wrote her book Deepening Musical Performance through Movement in 2007, critics pointed out the limitations of using language to describe movement (Graybill, 2012, p 141). In 2012, a website was launched which presented videos that exemplified the argument made in the book (Pierce, 2012). Ups and Downs is a doctoral thesis which draws primarily on my individual embodied experience as a violinist, and for this reason my analysis, as well as my core argument, is made through a compilation of videos presented and further contextualized in the present website.

The present dissertation takes advantage of the specific possibilities of website format, integrating the video essays not just as complementary examples to the written text, but as a main means for argumentation, analysis, and discussion. The central role of the video essays also guided the construction of the website. As if being an involuntary pun on the title of this dissertation, Ups and Downs, the structure of the thesis is, in a sense, turned upside down. Instead of a traditional structure, starting with a theoretical framework, research questions, and a method chapter, I open each of the three main studies with video essays, followed by several layers that analytically unpack the argument presented in the video. After a concise introduction in the form of auto-ethnographic texts, the reader is thrown straight into the action, encountering me in my studio experimenting with the interpretation of the score through body movement, and in discussion at rehearsals where I apply the outcomes of the experiments. The videos even allow the viewer to sit in the front row of the concert, with the special privilege of stopping, asking a question, or even suggesting a different interpretation of a given passage. Although, stopping the concert and asking questions is only virtual, as I have anticipated the questions and suggestions of the reader in my analysis and the editing process of the video essays.

Further analytical unpacking of the issues introduced in the video essays are texts with music examples, analyses of scores, comparative illustrations of body movements, and audio examples. The analytical texts, constructed in several layers following each video essay, progress from practical observations to theoretical implications of each study. The theory chapter at the end of the thesis summarises and weaves together the discursive theoretical trajectories of the three main studies. In this respect, it is the artistic practice that generates the necessary theoretical context, the analytical method, and also constitutes the main results. These results are summarized in the final conclusions in the theory chapter.

In writing a thesis situated in my artistic practice, I inevitably make some assertions and claims regarding the function of gesture in musical performance that may raise questions and suspicions among violin colleagues. Who do I think I am? How can I claim to have invented something as obvious as violin bowing imitating gesture and dance? Am I really saying that nobody before me practiced gestural violin playing which would dance, tell stories, or engage in theatrical acting?

I make no such claim! This project is not necessarily concerned with finding new ways, but rather wishes to explore, reflect upon, and experiment with, music as an embodied and multi-modal phenomenon, as it is manifested in the historical performance practice environment of today. As a researcher, I analyse these manifestations in my own practice as a performer, attempting to articulate and problematize some of the established assumptions of HIP, as other performers and scholars did before me (Taruskin, 1995; Butt, 2002; Haynes, 2007).

Although my projects and case studies are situated in the environment of Historically Informed Performance (HIP), the line of discussion and argumentation transcends the field of 'historical reconstruction' and encompasses musical interaction (McCaleb, 2014), assimilation of dance (Dalen, 2013), and 'musicking (Small, 1998). I apply the accumulated body of historical information to my living body, adhering to the recent concept of the performer being the primary musical 'mover' (Abbate, 2004; Shove & Repp, 1995). Understanding musical interpretation and performance through body movement (Godøy 2010; Gorton & Östersjö, 2016; Jensenius, 2007; Le Guin, 2006; Pierce, 2007; Östersjö 2008) is a starting point for experiments with the assimilation of mimetic gestures, dance, and poetic imagery into the kinaesthetic vocabulary of a violinist. In the final analysis, this brings together a wide range of approaches in what I call ‘embodied interpretation’.

The structure of Ups and Downs

The front page of this website, 'HOME', comprises a short video and the introductory text (Introduction) which you are currently reading. There are navigation links in the right hand corner of the Front page. The upper (blue) link leads to the next Section, 'From Gesture to Sound', which introduces the three main projects in general. The small green link opens the central 'Navigation map', where all of the sections and chapters of the thesis are listed and linked. 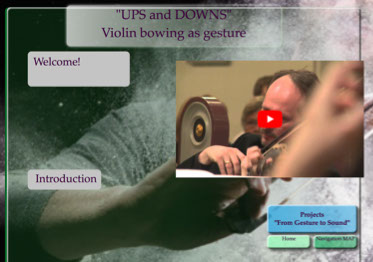 The blue and green links are present on all of the pages of the website, allowing either a linear navigation to the next section, or a return to the 'Navigation map' for free browsing. Some additional green links allow return to the previous section where it is useful. 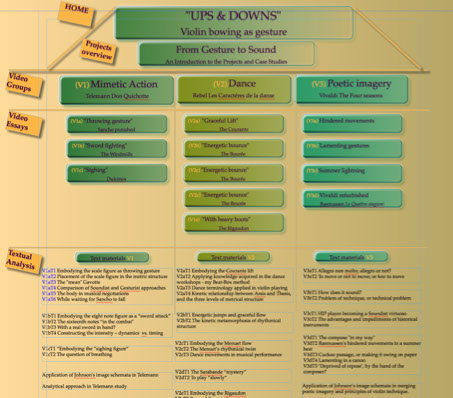 The Section 'From Gesture to Sound' introduces the three main studies, 'Mimetic action', 'Dance' and 'Poetic Imagery', and provides links to each study. 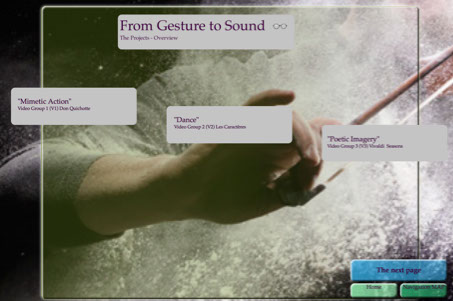 Ex. 3 The page 'From Gesture to Sound' provides an introduction and links to the three main studies.

Each study comprises three to five video essays (approximately 4 minutes long) and an analytical approach text, unpacking the analytical procedure behind all the video essays in the study. Opening the link to the first video group V1 'Mimetic action' leads to an introductory page and links to the video essays of V1. 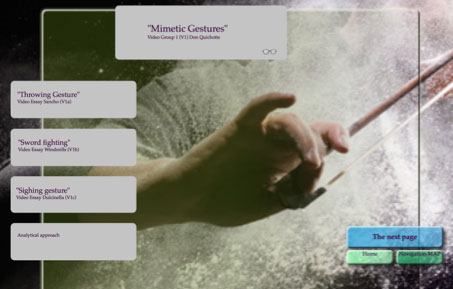 Ex. 4 The first study (V1) 'Mimetic action' with the introduction, links to the V1 video essays, and the analytical approach text. 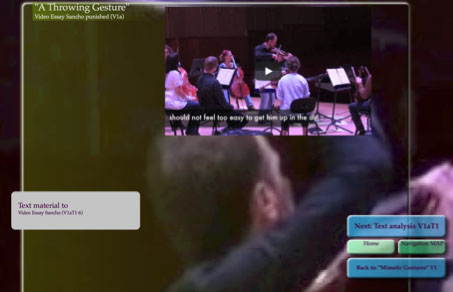 Ex. 5 The video essay with links to further textual analysis.

The final section of the thesis comprises a theoretical framework, contextualizing the practical explorations of the video essays through the theoretical concepts of embodiment, authenticity, musical gesture, and musical interpretation. At the beginning of the theoretical section the research aims and research questions are formulated; at the end the final conclusions are drawn. The general bibliography and a list of CD recordings produced during my PhD project can be accessed through links at the bottom on the Navigation map.

is comprised of an introduction to my project and an outline of the structure and navigation of the website.