In the last section of the 'Dance' study (V2) I return to Johnson’s gestalt image schemata (Johnson, 1987). In the section 'Mimetic action' above (V1) I applied the image schemata as a tool for analysing my embodied readings of the score. Through Johnson’s discussion of the basic bodily experiences of interacting with the environment, the function of (for example) weight, force, balance, and resistance, may further explain how metaphorical gestures implied in the notation can be transformed into the playing movements of a violinist.

To assimilate dance movements into my performance appeared less straightforward than the mimetic gestures. The narrative of Don Quichotte provides some direct links to the common embodied experiences. In the case of dance movements, there is no direct link. The dance workshops provided only intuitively constructed correspondences between playing and dancing. The metaphorical image schemata appeared to be crucial in corroborating and informing my intuitive kinaesthetic vocabulary of the individual dance forms.

The gestalt image schema of BLOCKAGE (Johnson, 1987, p.46) is applicable to the body movement structure and bowing action of several dances.

The sensation of a bitty resistance in the bow action when assimilating two 'bouncy' jettés of the pas de sissonne can be seen as the metaphorical elaboration of the image schema of BLOCKAGE (Johnson, 1987, p.46). The forward body movement is intercepted with two energetic bounces, triggered by the resistance in the bow.

Ex. 1: The Bourrée and the physical resistance encountered in the bounces.

An even more palpable feeling of resistance arises in the Rigaudon, where the forward trajectory of the body movement is intersected by the three successive down-bows, causing the body to jolt upwards.

Ex. 2 The heavier bounce in the Rigaudon triggers a more energetic resistance in the relation between bowing action and body movements.

Ex. 3 A comparison of the image schemata of BLOCKAGE and my annotation of the three down-bow bounces in the Rigaudon (Johnson, 2007, p. 46).

While in the Bourrée, the pattern of three arsic bounces with a thetic repose is repeated throughout the eight-bar phrase, the Rigaudon employs a different movement pattern in bars three and four. The downward scale stretching over two bars is translated into a metaphorical falling down or 'pushing against the wall' sensation in the body movement, assimilating a loaded stillness in the dance step-unit. There are no jumps, only a continuous pushing of the body against the steady resistance of the quarter-note 'wall' manifested in the bow action. The kinaesthetic experiential reference of pushing can be based either on the gestalt image schema of BLOCKAGE (Ex. 3), or, if the restraint is overcome and absent, the image schema of REMOVAL OF RESTRAINT (Johnson, 1987, p. 47). ‘The removal of a barrier or the absence of some potential restraint is a structure of experience that we encounter daily. The relevant schema is thus one that suggest an open way or path, which makes possible an exertion of force’ (Johnson, 1987, p. 46).

Ex. 3 The forward body movement in bb. 3-4 of the Rigaudon corresponds to Johnson’s image schema of REMOVAL OF RESTRAINT (Johnson, 1987, p. 47).

Vid. 1 Three jumps followed by pushing against the wall.

The sense of balance is a pervasive feature in our everyday lives. Johnson’s image schema of BALANCE (Johnson, 1987, p. 86) (See Ex. 4) does not necessarily imply that the symmetrically composed figure is a static structure. Maintaining balance in a moving structure depends on the interplay of its moving parts (Pierce, 1991). If a deviation from balance, caused by exertion of force, is compensated by a reciprocal amount of force as response, the feeling of balance is not distorted: ‘Balance involves a symmetrical (or proportional) arrangement of forces around a point or axis’ (Johnson, 1987, p. 85). 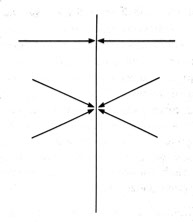 In the movement of a dancer or a musician alike, balance is always a central factor. A musician may translate the implied kinetic relations from a musical score into a physical domain through body movement. These movement patterns will consist of a sequence of impulses and reposes. The energy and character of each impulse will determine the quality of the repose. The more contrasting, varied, and surprising the interplay between the impulses and reposes, the more physically captivating and expressive the gesture that materialises. At the same time, the implied centre of the movements, Johnson’s point or axis of balance on which the force vectors are applied, is always present and palpable.

Assimilating the suspension of the arsic motion of the pas grave in the first bar of the Sarabande pattern requires a great sense of balance. The initial motion is drawn in a slow prolonged gliding step suspended on the second beat. When the centrifugal force, triggered by the body-floor relationship, reaches a moment of inertia, the transfer of weight tips the body in a fall towards the thetic repose in the second bar.

Ex. 5 The Sarabande performed with a kinaesthetic tension.

My annotations from the Sarabande above in comparison with Johnson’s image schema of equilibrium will appear to disturb the balance by the 'clash' in the two initial beats in the first bar. The balance is reinstated by the compensational force of thesis in the second bar (Ex. 6). 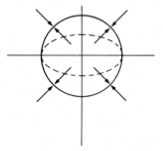 Ex. 6 Johnson’s image schema of EQUILIBRIUM (Johnson, 1987, p.87) “set in motion” by the Sarabande movement: the impulse in the first bar and compensating repose in the second bar.

Human interaction does not operate in a sustained regular motion, but in a sequence of impulses, reactions, and the final regaining of balance. Similarly, the dance forms imply movements structured as a cycle of actions and reactions, impulses and reposes.

The image schema of CYCLIC CLIMAX (previously compared to the inspiratory and respiratory sequence of sighing gestures in Video essay “Sighing gesture” Dulcinella (V1c) can possibly illustrate how the sense of balance is achieved in a moving structure by compensation of the deviatory forces by counter-forces and reposes. The interplay of impulses and reposes in the lively Menuet (Ex. 8 and Ex. 9), and the languid Sarabande (Ex. 7), are in both cases based on the image schema of CYCLIC CLIMAX (Johnson, 1987, p. 120), and have a similar shape in my performance annotations. But given the character, tempo, and the frequency of steps, the 'lively flow' of the Menuet and sustained 'veiled passion' of the Sarabande result in very different bodily sensations in performance.

Vid. 1 Johnson’s image schema of CYCLIC CLIMAX (Johnson, 1987, p. 120) and its implication on the kinaesthetic dynamics of body movements in the Sarabande and the Menuet.

Reading the dance forms through the embodied image schemata allows me to transcend the historical aspects and technical specifics of the dance step-units. Furthermore, it suggests an understanding of how an assimilation of the kinaesthetic relations of dance movements into my bowing action and expressive body movements can be based on the basic perspectives of human perception and action. Some of the schemata discussed in this section (V2) allow for a metaphorical connection between dance movements and the gestures explored in the section 'Mimetic action' (V1).

The following section, 'Poetic imagery' (V3), sees the emergence of further gestural cross references through the application of the image schemata; here, the embodied experiences are employed in the interpretation of the poetic images implied in the music of Vivaldi’s Four Seasons.

Back to Dance V2