Following Adorno, one may argue that a ’musical score is never identical with the work; devotion to the text means the constant effort to grasp that which it hides’ (Adorno, 1981, p. 144). Drawing on embodied music cognition, this thesis builds on the assumption that musical interpretation is also informed by body movement, which is grounded in an embodied understanding of music. Hence, a ‘devotion to the text’ (ibid) may also demand a departure towards the embodied origins of the music, beyond its score. Below, I will address two central theories on embodiment which have a direct bearing on the empirical inquiry into my own practice.

According to Embodied Music Cognition theory, musical perception is multi-modal and grounded in the body, which mediates our subjective sensations and experiences of the environment. In our interaction with the environment, we can predict the direction of a musical structure through forward internal models, or ‘associate personal sensations with a certain action (inverse modelling)’ (Coorevits et al, 2015).

Indeed, the role of the body is particular in that it causally connects with a physical environment as well as with an experience (of the subject who owns that body). The physical environment can be described in an objective way (e.g. the waveform of the music on my sound recorder). The experience can only be described in a subjective way (my subjective feeling in response to the music on my sound recorder). Similarly, musical gestures can be described in an objective way as movement of body parts, but they have an important experiential component that is related to intentions, goals, and expressions. (Leman, 2012, p. 5)

Leman calls the repertoire of gestures that are acquired in our engagement with music ’a gesture/action-oriented ontology’ (ibid, p 5). The present thesis is most specifically concerned with how this ontology can be accessed through a study of extended interpretative processes, analysed from video documentation of working process, but also, and most importantly, by drawing on the first person experience of the artist-researcher in that analysis. In such an inquiry, the complexity of musical creativity becomes apparent. Not only does an understanding of a human perception of music based on embodied cognition imply a relationship between action and perception and the role of the body as a mediating factor, but also, it implies that the subjective experience of the musician transcends the body to the social and cultural domains. Mark Johnson summarizes these multiple perspectives in the following way:

Music exists at the intersection of organised sounds with our sensorimotor apparatus, our bodies, our brains, our cultural values and practices, music-historical conventions, our prior experiences, and a host of other social and cultural factors. Consequently, musical motion is really experienced by us, albeit via our imaginative structuring of sounds. (Johnson, 2007, p. 255)

A powerful tool in our ‘imaginative structuring of sounds’ is metaphor. In my everyday violin practice I use bodily metaphors in all aspects of music making. Phrases like: ‘the sound has not enough body’; ‘lift the upbeat high’; ‘fall on the downbeat more heavily’ permeate the verbal musical communication in all situations of music making, from teaching to performing. But how can the body fall on the downbeat? How does the body lift the upbeat? One would logically assume that such a fall or lift of the body must translate into the bow action and result in a sonic representation of falling or lifting. Following this line of thought might lead to the conclusion that body movement should be restricted to sound production, and that movements which are not directly involved in sound production are not really necessary for 'pure' musical communication. These 'arbitrary' movements are traditionally thought to be artificially 'attached' and employed separately from sound production proper, in order to communicate with the audience or between performers, or as an emotional self-response of the performer (Jensenius, 2007).

Indeed, it is true that too big, too vehement, and unfocused body movements (surely triggered by sheer enjoyment and enthusiasm at best, or a lack of technique at worst, as if the performer would like to steal the pleasures normally the privilege of listeners), which are not translated directly into the sound, and not channelled towards the instrument, or which even disturb the basic sound producing movements, are the objects of disconcertment among teachers and performers.

It is obviously not the actual amount of movement itself that guarantees communication, understanding, and, indeed, embodiment. One cannot just simply employ the lifting, falling, throwing, hugging, and smashing bodily actions while playing the violin (the latter, smashing, has been successfully executed on stage by some legendary guitar players, HIP violinists are still waiting for the one to execute such a 'brave' – and expensive – 'gesture' on stage).

There must be a better way, and in the following section I present a theory that sheds light on the mechanisms of metaphorical communication between various art forms.

The theory of gestalt image schemata developed by Mark Johnson in his book The Body in the Mind (Johnson, 1987) is a central theoretical tool in this thesis. The three main studies, that explore various perspectives of the embodied reading of a musical score, utilise the image schemata in the process of assimilation of movement found in, or metaphorically related to, human action, dance, and poetry.

Johnson understands the image schemata as non-propositional structures derived directly from bodily experiences in the environment, and thus distinguished from the standard meaning of the term in recent cognitive sciences, where the scheme is understood as a reduced image of a concrete entity, event, activity, or process.

‘Under this interpretation the schema is a unified, recurring organization of conceptual and propositional knowledge and values that we share about typical situations and events’ (Johnson, 1987, p. 20).

If it describes the position of a chair in room, it is a rich image, a reduction of a concrete situation. But in Johnson’s understanding of image schemata, this schema represents an embodied gestalt, a non-conceptual bodily grasp of containing – or being contained – based on an experiential interaction of the body and the environment. Instead of seeing gestalts as a referential form or shape mirroring the outside world, Johnson proposes the experiential gestalts that ‘have internal structure that connects up aspects of our experience and leads to inferences in our conceptual system’ (Johnson, 1987, p. 44).

Although the moving away from particular towards general is a classical move of conceptualization, Johnson claims the possibility of his schematic diagrams emerging as ‘meaningful structures chiefly at the level of our bodily movements through space, our manipulation of objects, and our perceptual interactions’ (Johnson, 1987, p. 29).

The non-propositional understanding of the image schemata is crucial for their applicability in my thesis. If I were to approach the dance forms in their full complexity, learning to dance, and fully understanding the choreography, it would take many years for me to accomplish the necessary skills to execute even the most basic step-units and body movements. Even then I would still be a long way from drawing relevant conclusions applicable to violin playing. I would be working with images that reduce the dance choreography into dance notation, but with no connection to movements applicable on the violin.

I have applied the image schema of containment on several occasions, in relation to the throwing gesture in Telemann, and the stamping feet action in Vivaldi. Containment, and the related image schema of out, connected the actions implied in the notation to my embodied experience.

Being non-propositional, I could apply the same image schemata to diverse gestures in many different contexts. As a comparison, the reductive dance notation image applicable to only one specific choreography will not allow a direct assimilation into the body movements of a violinist.

Ex. 3 An image from dance notation does not translate directly into a violinist’s body movements.

To apply such a rich image that captures concrete step-units to violin playing, I need to translate the dance structure into a gestalt structures of force, such as the image schema of blockage, counterforce, diversion, etc. Only now, through basic experiential gestalts, can I metaphorically elaborate the dance patterns in the domain of violin playing. 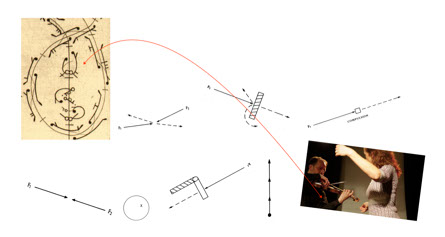 I assimilate the external gestural sources through non-propositional ‘schematic structures that are constantly operating in our perception, bodily movement through space, and physical manipulation with objects’ (Johnson, 1987, p. 23).  It thereby becomes possible to employ metaphorical representation of bodily action from different domains – such as dance and expressive gesture – into violin playing. And I don’t have to be an expert in all of the domains in question …